written/recorded over the past few months
go to anthonyoscar.bandcamp.com for more 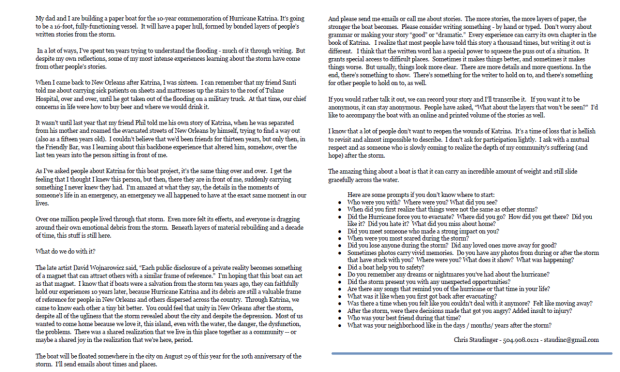 a boatload of stories. participate in my brother’s Katrina reflection. 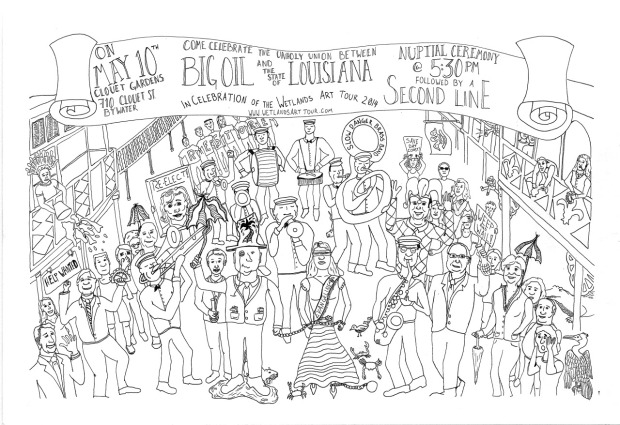 After attending the Louisiana Water Festival in Baton Rouge in March, a small group of friends started wondering how we could bring the spirit of that environmental rally back to New Orleans. The Baton Rouge rally took a loud stand against a state government that has historically been kinder to oil and gas interests than to its own people. We thought that since New Orleans has so much at stake,environmentally and in the present legislative session, the city needs a loud demonstration of its own.
But we learned from others in activist communities that a similarly-styled rally would flop in New Orleans. It’s not in the city’s DNA to protest in that way. But deep in that DNA is the ability to be satirical, loud, and passionate. So we focused on what New Orleans does best: parades and parties.
We settled on a satirical wedding and second line to mock, bereave, and holler about an increasingly visible and barefaced relationship between our state government and the industry that has destroyed its coast.
With the parade, we are not by any means making light of the situation. We’re being realistic about providing people a means to express their hopes, pains, and frustrations about the way they are being governed. We also hope to draw the attention of our fellow residents (those who are and will continue to be the most affected by the ongoing environmental degradation of this place).
And with the second line, we’re also being deliberate. The cultural quirks and celebrated carelessness that have made Louisiana famous have come at the cost of our coast. And that same beloved culture – the second lines, the music, the endless party – is what will be lost if we continue in our complaint, passive ways. It’s time we use that culture to create a momentum of resilience and preservation.
In light of a recent op-ed by columnist John Maginnis’, we hope to be as big, loud, and passionate as possible. “Steadily and without much legislative resistance, nails are being driven into the coffin of the coastal damages lawsuit against major oil companies,” he wrote. That’s why we are hoping for support from the wider community: to help rip out the nails, so to speak, of efforts that are clearly not in our interests as citizens and shouldn’t be in the interests of our representatives.